These issues and stereotypes about electroacoustic music are common in the minds of many people. So, in 2011 Ostap Manulyak invited a group of students and enthusiasts to organize at Lviv Music Academy concert to dispel these myths and prejudices. Another aim was also to clearly demonstrate that there are a huge and extremely diverse area of “classical” electroacoustic music which is “alive” and extremely interesting and also that EDM is only tiny part of all diversity of electronic music genres! As a result we organized a small concert titled “Ars electronica” where works by Yuri Bulka, Andriy Dzyatko, Ostap Manulyak and Yuri Seredin was performed. 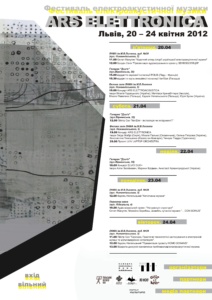 A year later, this idea has grown to a small festival called ARS ELETTRONICA. 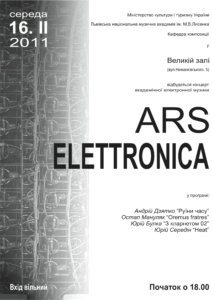 Festival of Electroacoustic Music VOX ELECTRONICA – an annual event that presents a cross-section of modern trends of electroacoustic music. The aim of the festival is to create a unique environment for the exchange of experience between Ukrainian and foreign composers, performers and artists working in electroacoustic music or audiovisual arts.